You cannot argue against this point. You can try – You can make excuses – You can say that works in theory. But you and I both know that all over this planet there is a group of people (lets call them the 1%) that are working harder than you every single day.

Maybe YOU are part of that 1% of over-achievers, overcomer’s – those that don’t care what others say or think about them.

YOU know that hard work pays. Heck, even above average work pays as most of the time – you just gotta show up.

You may not like bodybuilding at all – but watch this video and key on this phrase “you have to enjoy training”.

Look at yourself and ask yourself that question.  Did you pay the price?  Did you give it your all?  If so – it paid.

What will you do today to work hard and make it pay?  Email me now and let me know. 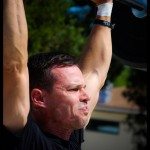