There’s no argument that Tim Kennedy is one of the biggest bad a**ses on the planet.

He’s a former Green Beret, sniper, sniper instructor and MMA champion. While serving in the Army, Kennedy was deployed to Iraq several times in both Operation Iraqi Freedom and Operation Enduring Freedom. He has also served in Afghanistan, and is the recipient of the Broze Star with a V Device—valor while under fire.

In 2009, Kennedy shifted from active duty serving with the Texas Army National Guard. This was when he became a professional MMA fighter, and has had multiple wins; as an amateur fighter he fought in 31 matches—1 loss and 30 wins. As a professional he had 24 matches—6 losses and 18 wins.

On March 2nd, 2019 Kennedy was honored by being inducted into the International Sports Hall of Fame at the Arnold’s Sports Festival in Columbus, Ohio.

On March 31, Kennedy announced his return to professional fighting. “After a lot of soul searching I have decided to return to professional fighting. This short retirement reinvigorated my passion to compete. I was born to fight. This break is what my body needed. I’m now faster and stronger than I have ever been. That yearning to walk into the octagon is something that I just can’t live without.”

Topping his bada**sery, Kennedy holds two black belts in Brazilian Jujitsu and one in the Modern Army Combative Program.

About his training schedule, Kennedy says, “I do strength and conditioning six days per week: Monday, Wednesday, and Friday are my mental toughness days. Thursday is yoga, and Tuesday is my powerlifting and Olympic lifting day. Saturday is cardio. I also go shooting three to five times per week.”

He also trains a “minimum” of two times a day.

Check out these intense workouts to find out how he keeps the sword sharpened and stays in a constant state of readiness for future challenges. 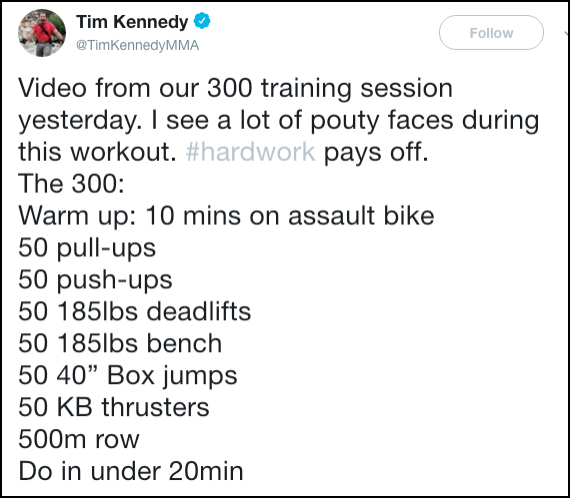 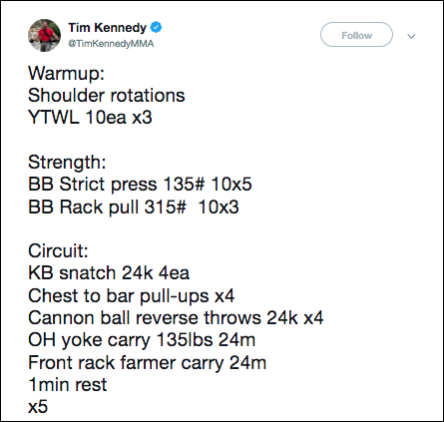 Y: Raise your arms to a 45-degree angle with your body,  forming a “Y.” Keep your body and arms straight, palms facing each other. This exercise targets the anterior [front] deltoids.

T: Extend your arms straight out to the side to form a “T.” This variation hits the trapezius, medial [middle] and posterior [rear] deltoids, balancing the anterior work from the “Y” movement.

W: Bend your elbows at a 90-degree angle and perform the same arm movement as you did for the “T.” This exercise specifically targets the posterior deltoids.

L: With your elbows bent at a 90-degree angle, rotate your arms up until your forearms are perpendicular to the ground. You’re hitting the anterior, medial and posterior deltoids and the trapezius muscles—moving your shoulders through their full range of motion with resistance.

With each exercise, slowly rotate your arms back to starting position and repeat. Perform three sets of 10 reps of each movement. 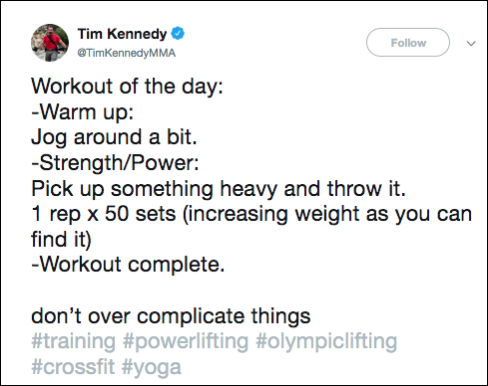 Kennedy also stresses recovery, as without it you can’t stay on top of your game and keep training. “I do everything,. Cryotherapy, ice baths, massages. I eat a ton of healthy food, and I prioritize sleep.”

As you can see, Kennedy is able to catch his Zs whenever and wherever he can. When it comes to diet, his priority is healthy and almost constant eating. “I eat all day long, nonstop, about six to seven meals.” His diet is only clean, healthy foods. Favorites: Oatmeal, eggs, avocado toast, vegetables and fruit. For protein he likes eggs, chicken elk and salmon.

Here’s an example of a day’s nutrition for Kennedy:

Note: For MCT oil: Mix or blend in coffee, drizzle on food after cooking, do not cook with this oil due to its low smoke point.
Measure your oats dry. Cook your oats with water and cinnamon, if desired. Up to ½ cup non-dairy, unsweetened milk is fine to add on oatmeal. Add fruit to oatmeal if desired. Drizzle with honey.

Saute vegetables (ex. spinach, peppers, onions, mushrooms, kale, etc.) in pan with a higher smoke point oil (like coconut or avocado). Add eggs & egg whites to pan, then scramble with vegetables. If you have bacon or sausage, feel free to saute with vegetable for more flavor

If having sweet potatoes, you can dice and make into a delicious breakfast hash with onion, brussel sprouts and/or root vegetables, etc.

One reason Kennedy believes staying in shape and in training is important is to protect his family.

On March 22, 2019, someone tried to break into his home. “A professional criminal attempted to break into our house this week. I was watching him on live video at 3:53 AM. Picture 1 is him trying a side door. Picture 2 is him trying a different door. Picture 3 is when he starts walking towards my kids window and… it is at this point I’m done waiting for police response. Play stupid games. Get stupid prizes. EVERYTHING I talk about at Sheepdog Response came into play. My security system, security doors, entry resistant windows, exterior lighting, landscaping, and most of all training.” As someone commented: “Breaking into Kennedy’s house has the same result as jumping into a paddock full of jaguars.”

A response to the comment: “You’d probably come out in better shape from the jaguars.”

On staying in shape, Kennedy has this to say: “It is a daily choice. You can’t be going to go the gym on Saturday and working really hard and then Sunday drinking beer, watching football, and eating wings. Every day you have a choice to be healthy and stay in shape, and it’s a choice you have to make every day.

Check out the video below for more info about how Kennedy stays in shape.

On becoming a better fighter, Kennedy says, “Be good at the fundamentals. Drill and have a coach you will be loyal to. Some guys go from sparring night to sparring night—train at this gym, train at that gym–but you’ll never get better that way. You need someone who has a vested personal interest in seeing you succeed and seeing you evolve as a fighter.”