A question we get weekly is what are the best AR-15 scopes and what do Navy SEALs use on their weapons?

But most of the guys will resort to adding some type of new sight to help them knock out the enemy. 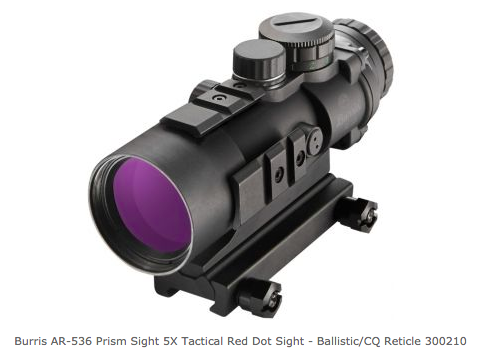 It took about 10 shots to sight it in and I am keeping a consistent grouping of 1″ or so at 100 yards (using common winchester UMC 55 gr). It is nice to be able to choose between green, red or black reticles. Only the green and red are illuminated. There are tactical rails on 3 sides in case you wanted to mount something like a Burris fast fire or some other red dot optic for really close stuff. The 5x is nice for 50-200 yards, but as I said before, the 5x does not work for quick target acquisition, especially moving targets under 50 yards.
Check out the Burris AR-536 at Optical Planet.com

What works well on the Burris AR 15 Scope:
I love that it has dual colors and variable brightness. I love the quick detach mount I purchased as an accessory. I like that it has side mounts built in – I can use my FastFire red dot very easily with this.

It also seems very rugged – I am not worried about it breaking. It provides a clear, fast picture without too much magnification for nearer targets. I have had it for about a year and I have not needed to change the battery. I rate it a 5 for what it is. I do own optics I consider much better but they also cost much more! 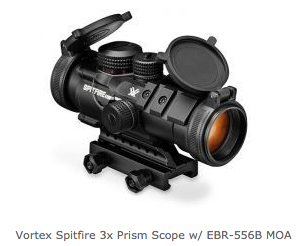 Comments about VORTEX OPTICS HUNT STRIKEFIRE RED/GRN DOT SCOPE:
There are so many good things about these scopes! The dot has very little “Bleed off” Considering the prce, I was not expecting such a nice solid dot! Very easy to use, click adjustments, on/off and brightness control are top notch. Built very well. Holds a zero- no problems at all. If you’re considering this scope, stop! Just get it and be happy ! NOTE; If you get this scope, MAKE SURE you get the high rings too ! It comes with low rings and they are WAY too low. Optics Planet has them and have good service.
Check out the Vortex Spitfire at OpticsPlanet.com

… and you know what? Can’t say anything bad about it. The mounting option, the buttons, the holographic sight with the EXPS3-0 has got to be the best rendition EOTech has come up with. It’s lightweight and quick to acquisition; the side mounted buttons make it great when it’s paired with the EOTech magnifier, and it requires only 1 CR123A battery. Gotta love the 1 MOA dot and the 65 MOA ring just makes closer targets that much easier to engage.

Bushnell AR 15 Scope Reviews by Venice:The Bushnell First Strike seems to be a pretty good scope. I have taken it out twice and here is what I alread notice. There is no on/off switch. You must cover the Bushnell Trophy Red Dot First Strike 5 MOA Red Dot

with a platic cap for the dot to turn off.

This cap is easy to lose and akward to put in your pocket. Would be very easy for the cover to fall in the bush and be lost forever. You would be unable to turn if off. I plan on using a bungy string for a teather. Your going to have to make an out-of-the-box-mod or run the risk of losing the cap. No big deal but something to keep in mind.

Aimpoint PRO review by Dustin: The AimPoint PRO offers a lot and that’s why I purchased it for my AR. The PRO comes attached to a decent mount, has flip-up lens covers, offers several regular and nightvision brightness options, and has a claimed battery life of 3 years. In the box I received the optic, with flip-up caps and mount already attached, a battery, a battery replacement reminder sticker, an allen key for the mount, and a set of instruction booklets.

The mount on the Aimpoint PRO Patrol Rifle Optic

utilizes a torque-limiting knob. Simply attach it to a picatinny rail and twist the knob until it clicks 3 times. At this point you have reached the optimum tightness, leaving your optic secured firmly to the rail without causing rail damage. I’ve removed my PRO several times for cleaning. There are small areas where the finish of the rail is slightly scuffed, but I’d say that’s about on par for any mount. I have had zero problems with the mount shifting during use. Also the mount includes a spacer that can be removed. For me, the height seemed perfect with the spacer in place. There are two things I dislike about this mount, the size of the knob and the direction of twist to tighten it down. The size complaint is pretty self explanatory. You can see by the product image that it’s a large knob and it sticks out past the optic tube. The direction complaint is probably a personal problem, but when forcing the optic forward in it’s groove on the rail, and tightening it down with the knob, it tends to move backward so that the optic isn’t seated all the way forward in it’s groove. It’s managable, but can be tedious.

What about the ddm4v5 eotech?
Any reviews for that scope?

Check out these questions that we have received from our readers.

Question: What is the AR 15 scope that Navy SEALs use? They use a variety of scopes from EO-Tech to Bushnell to exotic stuff you will never see on the open market.

Question: How do you like the Burris scopes for your rig? I have one on my Bushmaster and it works great.

Question: Which do you prefer with the bushnell AR optics vs vortex? Both are getting great reviews. Check out the video below.

Question: What are you hearing about burris ar 15 scopes? I have one and it works great.

Question: Which do you prefer with the ar 15 bushnell vs burris scopes? Both are good but I have a Burris on my AR-15.

Where can I learn more about supporting my black rifle rights? Check out the NRA here:

Question: What does the US military use? It depends on the service. The soldier at the top photo is using an EO-Tech. Others use an ACOG and some still use iron sights.