Greg Shaffer served in the Federal Bureau of Investigation (FBI) for twenty years. He is currently founder and President of SHAFFER SECURITY GROUP, a global security, risk management and tactical training specialty firm based in Dallas, Texas. Greg is a recognized as one of the nations’ leading and respected policy experts in the prevention of domestic terrorism and active shooter events.

During Greg’s tenure in the FBI he has served on the FBI’s elite Hostage Rescue Team; the HRT – while serving on this elite team Greg participated in numerous overseas operations to locate, capture or kill some of the world’s most evil people, to include Usama bin Laden and Saddam Hussein.

Greg has conducted tactical operations in Iraq, Pakistan, Afghanistan, Yemen, the Philippines, Indonesia, East Africa and the United States. While serving on the HRT, Greg received enhanced training and resources to address the most complex of threats, working with Department of Defense Special Mission Units and other foreign counter terrorism teams. Want to start training like a badass but you’re not sure where to begin?
Check out SEALgrinderPT’s Lite Training System! 45 days of workouts that are perfect for beginners…or even someone wanting to get back into training after a long break.

Greg also served as the FBI’s Legal Attaché in Budapest, Hungary where he led the FBI’s international mission to defeat national security and criminal threats by building a network of trusted partners and strengthened international capabilities. 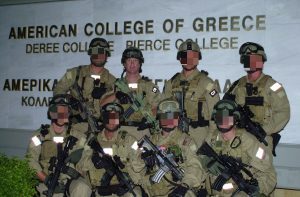 As the Counter Terrorism Supervisor in Dallas, he was responsible for the security of all major “Special Events” held in the Dallas metroplex. Greg was the FBI “Lead” for the security of the 2011 NFL Super Bowl; along with the supervision for security for the 2011 NBA Finals; the 2010 NBA All Star Game; 2010 MLB World Series; and many other high profile events which were considered targets of terrorism.

Greg was also assigned to the National Counter Terrorism Center (NCTC) where he served alongside other members of the Intelligence Community and was the Program Manager for all FBI Counter Terrorism related investigations in Southeast Asia.

Upon graduation from the FBI Academy in 1995, Greg’s first office was in the FBI’s San Francisco Office where he was assigned to the Multi-Agency Drug Task Force and was a member of the San Francisco FBI SWAT Team. He is the recipient of the Arlington Police Department’s Medal of Merit and the Office of the Director of National Intelligence (ODNI) Award for Investigative Excellence.

Greg has trained police officers, SWAT, Counter Terrorism Teams and civilians in tactical firearms in Kuwait, Iraq, Saudi Arabia and across Southeast Asia, Europe and the United States. He is now internationally recognized as one of the leading experts and authorities on the phenomenon of “active shooter” events and Domestic Terrorism Prevention. He has appeared on numerous national television networks, including Fox, CBS, NBC, and ABC along with numerous syndicated radio broadcast programs. Greg has a Bachelor of Science degree in Management from the United States Coast Guard Academy; a Master’s Certificate from the Australian Institute of Police Management and is a graduate from the FBI Academy in Quantico, Virginia.

Seal Grinder PT was given a very special interview by Greg Shaffer, Former HRT Member and FBI Agent and is now available in this audio below: (Click Play Below) and enjoy this EXCITING and INFORMATIVE interview.

To Visit Shaffer Security Group Please Use This Link Here www.ShafferSecurityGroup.com or simply Click on The Picture Below: