Self-Compassion Is The Highest Form Of Mental Toughness

Mental toughness, in the athletic world, is generally defined as perseverance despite  challenges and obstacles.  It’s recognizing that the negative self-talk our minds spew at us are really just lies.  Or, at least, misinformation.

So when I say that mental toughness also means self-compassion, it means giving yourself a break.  It means allowing yourself fragility.  It means being accepting, wholly that you can, do, will and will again make mistakes.

Accepting this can be a very tough thing for people to, well, mentally accept.

Mental toughness is a term that’s applicable to regular, everyday life, not just athletics. It defines how you choose to show up in any trying situation, large or small.

Self-compassion is the difference between a tantrum and gracefulness.

And, yes, men can have gracefulness, too. I don’t mean take up ballet. I mean act in a way that shows you both respect yourself, you honor yourself, you accept yourself — and those around you.

I can be really tough on myself — mentally tough and physically tough when I push myself.  I was once told, years ago, when I was in the Air Force that I’d make a great Drill Sergeant.  I did consider cross-training into that field, but I got out before that was possible.  I think it’s her, my internal Drill Sergeant, I tap into when I’m really pushing myself.  And she loves the pushing and encouragement so much, she’s so good at her job she can get a little gung ho.  Somewhere in there, though,  she sometimes goes from Tough Love to Dungeon Keeper, and she really had to learn the odd idea that mental toughness is something that’s applied to learning how to be kind to myself when I do mess up…to have compassion for myself.

She doesn’t show up just for exercise.  She’s been a part of me, part of my determination, my whole life.  And the hardest lesson she and I have had to learn is how to apply self-compassion.  Self-compassion is the hardest form of compassion to have and give for many people.

Sometimes it’s viewed as weakness, as something that drains the drive towards goals from us.  I don’t know why, and I don’t know why I had so much trouble with it.  I can only guess I perhaps thought that if I gave myself compassion, I’d give myself too much and I’d become soft.  I don’t know.  I guess maybe I saw it as something that would make me fragile.  All I know is that when I started working on my…distrust of it, I guess you could say, my aversion, even, and I started applying mental toughness towards self-compassion I began seeing some pretty terrific changes.  Not in just how I viewed the world, but in how I viewed myself.

Mental toughness isn’t just about perseverance towards an athletic goal; it’s also about learning how to accept our weaknesses.  It’s really the same mindset. 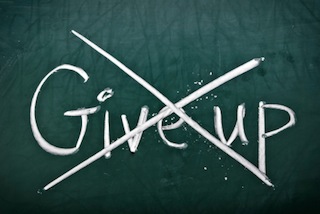 Self-compassion has nothing to do with weakness or becoming fragile, it doesn’t mean you’re going “soft” or lazy.  It doesn’t mean seeing yourself as a failure (as I had a client tell me once).  It means you’re allowing yourself to have your humanity.

Allowing yourself “weakness” means you’re finding new places to add strength.  Accepting “weakness” means you’re “accepting” strength, mental and physical.  And a funny thing happens when that’s fully done: suddenly you feel stronger.  Reaching a goal of full self-compassion (though there will still be days when you don’t have it, and that’s okay) is a goal, and we can talk/argue ourselves out of reaching it no differently than hitting a new PR of deadlifts or strict pull-ups.

It also gives someone the ability to allow for mistakes.  Meaning — they allow that they happen sometimes, which allows them to use the mistakes as learning experiences, not Failures.  Capital F.  It means allowing that today’s workout was pretty shoddy and less than what you maybe could have done.  Or that you overspent again…but you’re getting clearer on why.  Even the most elite athletes have crummy workouts for whatever reason and the most well-established financiers waste money at times.

But if they beat themselves up, it just makes things worse. Mistakes are, after all, as Henry Ford said about failure: An opportunity to begin again, this time more intelligently.

Self-compassion, and the mental toughness that’s needed to get there for some of us, allows us to, as we were taught in the Air Force, adapt, overcome and proceed.  It allows someone to get solution focused, rather than problem-focused through self-rejection.  But for many of us, self-compassion can be a very difficult thing to have.  We might have it in spades for other people, but not for ourselves.

Having faith in and compassion for ourselves is the hardest form of compassion for many people.  Why?  I’m not exactly sure.  It’s linked to self-confidence, I think.  Self-belief.  The understanding that failure can be an option, and can be something from which learning can come.  It’s not exactly linked to pessimism versus optimism, but I suppose there’s some of that in there.

Mostly it’s that there are filters or beliefs rolling around in there that we’ve picked up that tell us mistakes are unacceptable and shameful, and we’re stupid — but it’s all right if someone else makes them.

It’s almost like having humanity and humanness and flaws is an incredibly humiliating thing for us, but totally acceptable for others (although, there are a lot of people who feel it’s unacceptable for anyone to make mistakes).  I count myself as someone who can sometimes still do that — be very allowing for others to make mistakes, but then hold myself to an impossible idea of perfection and get extraordinarily frustrated with myself (I “should” know better, right?)

And, then, one day, during yoga a thought came to me.  An understanding — an awareness that blew through me and settled into my bones. I realized that the key thing to remember is that the more compassion you have for yourself, the more you have for others — and vice versa.

That’s an incredibly powerful thing — but it can, and sometimes does, take a great amount of mental toughness to put it into practice.