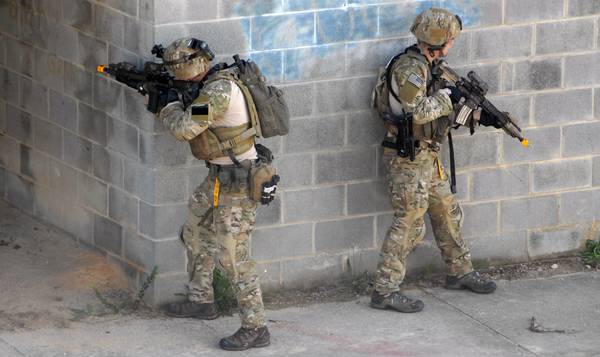 Whether you’re looking for a pair of good hunting boots for the season or gearing up for a military deployment overseas you will need a good pair of boots.

What is the best boot? The boot that fits your foot the best, drains well and lasts a long time in rough terrain.

You could have the most expensive tricked out tactical boots known to man…but if they are ill fitting—they will destroy your feet. Check out the list of the Top 10 Special Forces Boots and footwear and you decide what is best for your feet.

The Under Armour Valsetz is great!, it feels good and it is super comfortable.

It works great in the rain as it has a really good tread.

This is a great boot for Law Enforcement and SWAT or Special Forces working in urban environments.

The female police officers that I work with would like to know when the female version will come out. We know several guys that have used this boot for GORUCK and SEALFIT Kokoro events.

These are a great overall training boot as it protects the foot while draining easily when getting in and out of the water.

are really lightweight. The Dura-Shock sole also helps on long runs and continual pounding running to the chow hall and obstacle course.

If you need a boot for colder weather, the Bates M6 and M9 have 400G thinsulate insulation. The Bates M9 does not look like a snow boot but can take harsh conditions for short durations. I would not wear it on an Arctic expedition but it can do well in snow in the mountains.

We have observed the Salomon boots being worn by Navy SEALs and urban SWAT teams recently out in the field. I was able to ride along with Las Vegas SWAT to serve a warrant on a drug dealer. Several of those operators were using Salomon and Under Armour.

This boot is lightweight but has excellent traction and allows you to move quickly if needed. It does have a speed lacing system which can be good and bad depending on how you use your laces. I like to wear my boots a little loose but comfortable and like traditional lacing myself (I have several shoes with speed lacing and am not sold on it).

The first pair of Danners I put on I was impressed with.

I put my foot in these boots, and I could flex my foot in in direction: forward, backward, right, left and they boot just moved with my foot with no discomfort. I could bend down and flex the toe and the supple leather in both the toe and the back of the boot just flexed perfectly with my movement.

are amazing. I tied them as tight as I would a pair of boots a year old and they just moved with my foot perfectly. I can’t emphasis enough how there was absolutely no break in with these boots.

I am using this boot for training up for and going through Army Ranger school. To start off, i put warm as a con because i live in the pacific northwest, my feet were super warm in this boot and I am concerned about going down to Georgia in the summer.

That being said, the pros of this boot outweigh the cons. However hot my feet have gotten, so far. I have tried many boots, and am writing this review so that readers can get a good idea of what the Danner Striker Torrent Boot

I also don’t just walk around the street or go to the range and get them muddy. I’ve done climbs of over 6000 vertical feet in rough terrain, including snow, ice, mud, scree, rock, dirt, etc.

These boots are AWESOME. They are indeed the lightest pair of boots (summer Bates included) I have ever owned. (15 years and counting) I ordered the Lowa Zephyr Hi GTX version for the added water protection and my dogs didn’t really “sweat” in them.

The laces provided were flimsy and didn’t last very long. Simple fix…take white “issue” laces-ask your supply and soak them in tea (you have limited resources downrange-those that have been will attest) and these laces still are in the boot to this day(almost a year out of country).”Break-In” time is virtually non-existent with these as well.

I actually took a PT test in them (once) and they felt like sneakers(and yes, I passed). I have plantar fasciitis (read: flat feet) and between those and some good orthotics

, I’ll probably order another pair for my next deployment.

LOWA is a German manufacturer so there is no NSN. (Cannot order via your supply chain) Bottom line: WELL worth the money.

Only this time I’ll secure them BEFORE movement into theater. And yes, order them a size larger as they are made in Europe so they tend to run a size smaller than what you’re used to in the US. (I only gave them 4 stars because of the laces issue.) 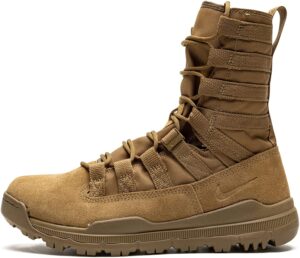 This is a boot designed to meet the rigorous demands and uniform suitability of military and first-responders. The Nike® SFB Gen 2 8″ tactical boot is light weight (1 lb .08 ounces) is constructed with tough suede leather and nylon canvas uppers.

I like the full 8-inch collar which offers protection and lots of ankle support. The lacing system is good and I like how it keeps your boot in place as you move.

I hike through a stream and you can see that this boot drained out well and that it dries quickly in the sun. I am an older athlete so I like the foam midsole that delivers lightweight cushioning. This boot has a saw tooth design at the arch which makes it grip during fast roping.

I live in Florida and frequently hike through very wet/swampy areas and have a difficult time finding a boots that can drain water and dry out fast enough to keep my feet comfortable.

Waterproof boots don’t work in many of these areas because the water goes over the top of the boots and then they take forever to dry out and leave you with swamped feet. For a while I have been using Vietnam style jungle boots, but I sure am glad I found these as they are much more comfortable.

drains water incredibly fast and also dry out extremely fast. In addition, they are very comfortable. The second day I had them I took them out into the sticks and wore them for about 8 hours and had no blisters or hot spots on my feet, and this was without any sort of break in period.

They are great for warm weather climates because they breathe exceptionally well, keeping your feet quite cool. They are also very flexible and feel like you are wearing a comfortable sneaker more than a boot. Overall, these boots are absolutely wonderful if you live in a wet and warm climate. I highly recommend them.

This is a great boot that is both lightweight and can take a lot of abuse. At only 14 ounces per boot and 8 inches high you can expect this boot to feel light on your feet.

The Oakley LT Assault boots have drain holes in the soles and can shed water quickly. This can be a key feature if you are in wet conditions and want your boots to dry out.

Question: What are the best boots used by US Special Forces?

Answer: It all depends on the mission first as that will tell you which boot to choose. The Bates 922 is probably the go-to boot for most missions but probably not for cold weather snow work.

Question: I have flat feet and trying to train for Special Forces. What do I need to do to trick out my boots?

Answer: You need to add a good orthotic like the Superfeet Green Premium Insoles. This will help you.

Question: Coach, which boot would you prefer with the Salomon quest or jungle boots?

Answer: I would go with the Salomon vs jungle boots.

Question: What are the Under Armour Air Force combat boots?

Question: What are a good pair of German Special Forces boots?

Answer: The Haix boots are made in Germany and used by elite forces including GSG-9.

Question: What are hiking shoes used by Special Forces?

Answer: We used a thin hiking shoe similar to Pallidiums for some training. Rumor has it that Navy SEAL Team Six used Vasque Juxt Multisport Shoes for the raid to kill Bin-laden.

Answer: Yes; we had a pair of Danner Acadia boots issued on the SEAL Teams.

Question: Which Solomon boots are used by Special operations?

Question: What is a top rated rough out boot?

Question: If you had one Special Ops boot to pick which one would it be?

Answer: You can’t go wrong with the Bates 922 but I also like the Oakley SI Assault 6″ desert hiking boot and Lowa zephyr Spec Ops boots.

Question: Which do you prefer with the jungle vs desert boots?

Answer: It depends on the mission but I am partial to jungle boots as most of my training is in the forest and streams.

Question: What about keen vs Salomon boots? Or Keen vs Merrell?

Answer: Both are good boots but I would try them both on and see which one fits your foot better.

Question: what about the UA Jungle Rat vx Nike SFB? Both are good boots.

Answer: I would try each pair on to see how they fit and then make a better decision.

Question: What boots are currently being used by US Army Rangers?

Answer: I got in touch with one of my buddies in Ranger battalion and he was just issued two pairs of boots. The Salomon Quest 4D GTX boot and Salomon winter weather boots are standard issue for US Army Rangers at Ft. Lewis.

Question: Coach, how can I know if bates 922 fit with different sized feet?

Answer: Many athletes have feet that are slightly different in shape and size. The best thing is to try on the Bates 922 boots and get a feel for them. You can always add a thicker sock to compensate.

Brad McLeod knows first hand about reaching goals and working through failures to win. After passing Hell Week and Dive Pool Comp at BUD/S, he failed a math test and was kicked out of training. Despite the odds he returned a year later to graduate and served as an operator on the Navy SEAL Teams for 6 years.

Today, he helps Veterans and athletes achieve their goals. Check out SEALgrinderPT Coaching to help you step up and take hold of your dreams and realize your goals.

We are a proud supporter of the Navy SEAL Foundation and the UDT/SEAL Museum.