Top 5 MMA Fighters of All Time There’s no doubt this list may cause some argument because everyone has their opinions for who is the best.

The thing is this not a popularity contest, but rather a mention of fighters that have always produced results while in the midst of the toughest competition.

After all, iron sharpens iron. For the purpose of opinion and only limiting the slots to the Top 5 here in this article it’s worth mentioning there are several great fighters that are not mentioned here simply due to limited space. We can only give the top 5 a shout so we went with these guys.

I don’t think too many critics would argue over this group of fighters. During this time Chuck racked up an 18-2 record which consisted of defeats against the likes of Tito Ortiz, Guy Mezgar, Vitor Belfort, and even Randy Couture (by KO twice).

Chuck Liddell had to defend the UFC heavyweight belt on 4 occasions and was known as one of the hardest hitting fighters of all time.

This is a dangerous man. Randy Couture, or “Randy Captain America Couture” never went on a very long winning streak, however one could make an argument that his peak occurred in a one year span where he won 6 of 7 fights defeating some of the stiffest competition of the time, consisting of Jeremy Horn, Kevin Randleman, Tsuyoshi Kohsaka, and Pedro Rizzo (once by TKO, once by decision).

During his journey he also won the heavyweight belt and defended it twice.

The thing that made Randy special was that he is the oldest UFC fighter to win a bout doing so at the age of 46. That’s an impressive feat not to mention the fact that he held a championship belt in 2 different weight classes.

It’s also important to mention that Randy was also a former United States Army Sergeant, collegiate and Greco-Roman wrestler, and is recognized for his roles in several movies such as the star- studded action hit The Expendables. During that time Royce Gracie brought Jiu Jitsu directly into the forefront of UFC winning three UFC tournaments, the most that anyone ever won during tournament-style fighting in the organization. This was during the early days of the UFC where there were virtually no time limit rounds, no weight classes, and very limited rules.

It was true Gladiator style fighting.

He shocked the world stopping all 11 of his opponents by submission. As if this wasn’t enough he managed to post a winning record against his two greatest rivals: Ken Shamrock (1-0-1) and Dan Severn (1-0).

When he fought Severn he hung in despite a near 90 pound weight advantage in Severn’s favor. Once again there were no weight classes so he ended up grinding through a grueling match on his back underneath his opponent for almost 16 minutes before defeating him with a triangle choke.

Royce Gracie is no doubt an all time great and can almost be at the top of any list regarding great fighters. Georges St. Pierre holds an impressive 26-2 overall MMA record since he started fighting on Jan. 25, 2002. His losses are by stoppage to Matt Hughes due to an armbar and the second was to Matt Serra involving a TKO.

George St. Pierre (aka GSP) was able to avenge both his losses. He did so with Hughes on two other separate occasions and was able to do so by a TKO and an armbar. He beat Serra with knee strikes to the body and it has been regarded as one of the greatest upsets of all time.

GSP is also known for his commitment to preparation outside the ring as well with his innovative pursuit to strength and conditioning drawing from dynamic elements of training such as bodyweight, gymnastics, and olympic lifting.

His fitness level also proved to be an asset after returning to the ring just this past November after a bit of a hiatus from the sport recording a win against Michael Bisping with a rear naked choke in November of 2017. Silva was the UFC Middleweight Champion and held the longest title streak in UFC history.

If that’s not impressive enough the streak itself lasted a whopping 2,457 days! During this long period of time Silva was able to beat some of the biggest names in the business including the likes of Dan Henderson, Chael Sonnen, and Rich Franklin.

Silva is known for his striking ability having mastered the art of Muay Thai which is arguably the most devastating striking form on the planet. The president of the UFC Dana White has been quoted as saying that Silva is the “the greatest mixed martial artist ever.”

There is no doubt Silva deserves a shot to be mentioned at the top of this list. 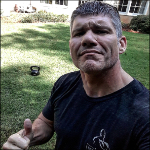 QUESTION: I’m starting to more training in MMA but I’m dragging in recovery. I think I might not be eating enough. Do you have any tips?

ANSWER: Yes; check out this article: Diet and Nutrition Important in Exercise Recovery with Boxing and MMA.

QUESTION: I graduated college this past spring and I did really well. But I feel like I can’t get focused on life outside of that. How can I stop feeling like I’m just drifting around and get motivated?

ANSWER: Check out this article where I talk about that and how I got going again: #1 Tip on How to Make Today Matter (and Get $hit Done). What Can We Learn From MMA?