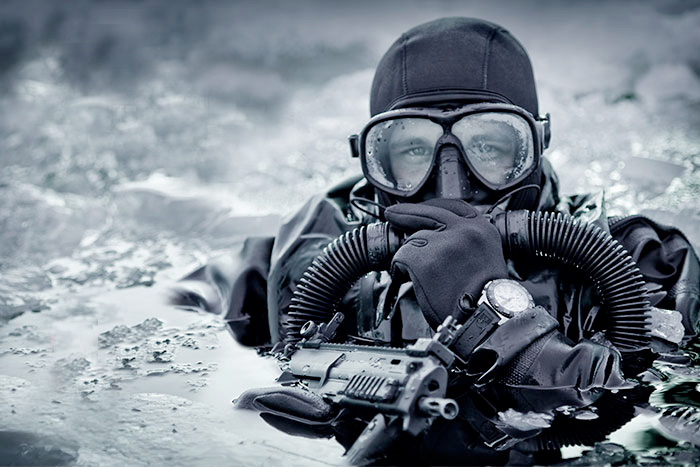 Want to know which is the best watch for a Navy SEAL?

During my years in the service, I’ve paid close attention to the dive pieces of my swim buddies and have taken a huge interest in them myself.

A proper timepiece is an essential piece of equipment for any SEAL.  What most of us are looking for is a piece that can accurately keep time at operational depths, while being extremely durable and cheap on the wallet as well. 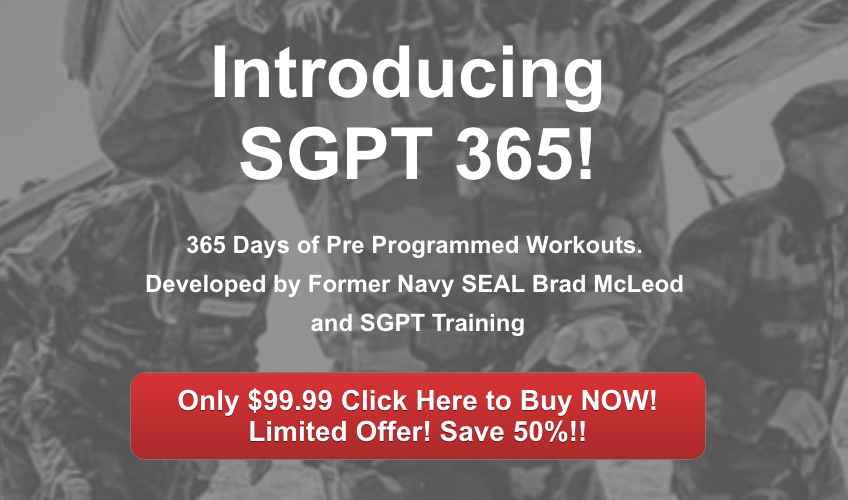 Check out this list of recommended watches by Timex, Luminox, Casio, Sunnto, Rolex and Seiko (all products have been worn by SEALs over the last 4 decades).

Each of these watches are ranked by both popularity and quality amongst SEALs.

Special Mention: The Classic Timex Ironman Watch has been getting a fair amount of coverage thanks to Jocko Willink and his Zero Dark Thirty Instagram posts. Check out Timex Ironman on our online store. Great price for a really functional watch. This is by far the best product I ever bought. I had a swiss army summit xlt for years and replaced it with the same watch because I loved it so much. The only time you would ever see me not wearing it would be walking through metal detectors at air ports. I love the Luminox Evo Blackout Watch 3051

I like pieces that have a tactical look to them. Big, showy pieces with a ton of bling aren’t my style. When I would wake up in the mornings before my alarm clock sounded, I would have to hold my wrist inches away from my face to see if I had to get up for work.

The markers around this piece aren’t green paint that has to “charge” in the light. They’re tiny tubes filled with a radioactive gas that luminates 24/7 with or without light. The blue markers look so sick and the orange 12 indicator is just as sharp.

Question: What piece were you issued in the mid 1980’s in the Teams?

Answer: I was issued a Seiko dive watch

. But I ended up wearing a Casio G-Shock Classic

as it was lighter and thinner.

Question: What dive watch were the old Frogmen from the Vietnam War issued? AS so many other competent reviewers have stated, this is one tough and classy tactical timepiece. In fact, the G-shocks are the preferred choice among USMC Marine Corps Infantry, MARSOC, and Army Special Forces guys (NOT the brand that claims to be the “official” issue for those underwater elite fellas). THAT brand seems cool, until the glowing pieces come detached and wander around in the housing. Not good. piece won’t have that problem and it will still provide you with a low-profile, abusable time-piece with the functions you need to accomplish your assigned mission. I bought this for timing things that needed to be timed with a countdown timer :D, and that wouldn’t stand out like a sore thumb as “tacticool” or like a wannabe aviator.

Question: Do you have any info for the Rolex submariner vs Luminox?

Answer: Check out the video below:

Answer: My buddy in the Rangers wears a Casio. Guys in Delta wear a wide range of pieces from Luminox to Casio. I was issued this G Shock before leaving for Iraq. Everybody in the battalion was issued it before we shipped out for Iraq back in 2005.

Five years ago today actually, and the battery finally just died last night, WOW! This thing lasted through an entire tour in Iraq, it made it through all the blood, sweat and tears and it just kept going.

Question: Do you have any info on Luminox vs G Shock? Or MOM Special ops vs G shock?

Answer: Check out this video for the Suunto Vector vs Casio G Shock:

Answer: Not in modern times. Yes; back in the old days frogmen were issued Rolexes. I was on a course awhile ago, and some of the instructors were wearing Cores. They loved it, but said that using the compass a lot drained battery. Also that you need to regularly calibrate height and compass. (To be fair, that’s what the manual says too, and it’s a simple operation.)

Normally I wear an IWC, which is lovely, but not really something you want to be throwing yourself around in- I was considering saving up for an Omega, but logically it didn’t make much sense. I’ve had my Suunto Core Sport

for a week and so far it’s really excellent. It doesn’t take too long to work out the operation either.

Question: Which watch would you prefer with the Luminox blackout vs the G-shock Gulfmaster?

Answer: Both are great watches. You can find good reviews on the Gulfmaster.

Question: Where can I find out more info on becoming a SEAL? A short and sweet story about this model of Seiko. In February of 1978 I was in a specialized unit of the Air Force and had just arrived at Clark Air Force Base in the Philippines. I needed a good piece as my old Timex had just broken. I went to the BX and bought it for $110.

Most expensive piece I had ever owned but I needed a good one and figured this was it. I wore the Seiko Dive Watch

on my left wrist everyday, all day for 22 and a half years! There is no embellishment here. I sent it in every 5 years or so for a cleaning and adjustment and that’s it!

It went with me everywhere through my youth to middle age. It is truly like an old friend – the things we had done and the things we had seen – death, destruction, sea depths, high altitude, girl friends, wives, marriages, divorces, child birth, child graduation. Incredible!

The day the jeweler told me it was wore-out and could no longer keep good time was the day I put it in my safety deposit box.

Question: What about Luminox vs Victorinox?

Answer: Both are great watches so I would try to put them side by side and see which one has the features that you would want? Which one fits best on your wrist? is a superb day piece.

Although I am on my second one in eight years, this may be a record, as I am not easy on gear and have been known to break stuff quickly.

Here is a picture of the back: 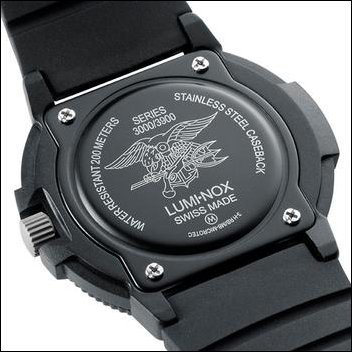 The crystal on the first one I owned cracked, but the second one is driving on like a champ and no problems at all.

I just had a buddy ask about this watch and he bought one too.

Question: Does Tissot have a Special Forces watch?

Answer: Yes; they have several models of rugged military watches. I own several TAGs, Breitlings, Omega, Citizen, Torgoen, and Tissot. This is my first Luminox, and I bought the Luminox EVO Navy SEAL Colormark

the Tritium illumination vials – everyone should have at least one H3 in their collection. All markings are *very* high contrast white.

The tritium 5-minute marker vials are BLUE, the second hand marker vial is BLUE, with GREEN vials on the hour/minute hands, a GREEN vial on the 12 hour marker and a small GREEN bezel marker.

The tritium illumination isn’t as bright as perhaps some marketing material and pictures would make it out to be – however it is very good and certainly does the job in low light or darkness. The face is large which is my preference, about the same size as a TAG Formula One Grande. The Sub needs no intro, but the new Sub is a better boat all around. First, the case redesign, claimed by father Rolex to be more sporty, but is actually a Deepsea lite. The new Sub case is beefier, bigger, and thus heavier and slightly thicker.

The bezel is georgous and it’s platinum coated ceramic is stunning in looks and performance. The Rolex Submariner in Black

an obvious upgrade of the old scratchable Aluminum one.

The bracelet is almost straight off the Deepsea and delivers the most satisfying clunk when set down. It is literally solid unlike its hollow predecessor, and the clasp is the world’s best IMHO.

On a side note, the Glidelock adjustment is amazing, but also necessary given that the sheer mass of this beast often requires daily micro adjustment to keep it fitting properly and comfortably. A note – S.E.A.L. Brandon Webb wears a Rolex Submariner and gives good reviews.

Question: What about the Casio Gulfmaster vs. Suunto core?

Answer: Check out the video below on the Gulfmaster vs Protek.

Question: What about Victorinox vs Luminox? Or the evo aqua timepiece?

Answer: They are both great watches so I would look for the one with features you like. I have owned G shocks for 30 years both during my time on the teams and afterwards working in the field. I have recently purchased the Casio G-Shock GD-120

This piece is a little bigger but is not too big. I have beat it up for months and no problems at all.

It lives up to the same protection and workmanship that the previous 3 decades gave me. Thanks Casio.

Question: Why do Air Force PJ’s and Special Forces like the Rolex submariner so much?

Answer: Because it was issued many years ago.

Question: What about the Tudor Heritage Ranger vs Rolex?

Answer: Check out the specifications on the Tudor Ranger here: