Formed in 1977, “Delta Force” is the 1st Special Forces Operational Detachment-Delta (1st SFOD-D) in the US Army. Its primary focus is on counter-terrorism and the capture of high-value units (e.g. high-ranking ISIS members).

The current official name for the SOF team is the Army Compartmented Elements—or, “ACE”.

In this awesome video, John “Shrek” McPhee (the “Sheriff of Afghanistan”) talks about how he first became a US Army Ranger, then a member of the Delta Force.

Check out SGPT’s best selling program, “So, You Want to be a Ranger?”!
Written by Tom Coffey, SGPT coach and former US Army Ranger, you’ll crush RASP!

About his initial training—boot camp and Airborne School were easy. But “RIP—Ranger Indoctrination Program was an eye opener. It was no joke. It was brutal—brutal every day was the Ranger standard. I [saw] stuff I’d never seen before [when it came to training].”

Best advice he got for his training?

“There’s nothing that comes up each day you can’t do.”

Check out the video from Sgt Major Shrek and listen to his real world experience.

John “The Sheriff of Baghdad” McPhee served over 20 years in the US Army and retired in 2011. He is often known as “SHREK” to his teammates. He has trained many elite troops around the world during his years as a Special Forces operator.

Are you interested in joining the US Army and working you way up through the Special Forces pipeline? 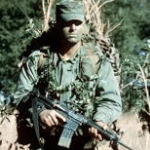 QUESTION: Coach, where can I get info about joining the Army and becoming a Ranger?

ANSWER: Get in contact with a local recruiter. You can also get info about joining the Army on the Army’s website here. For more info about becoming a Ranger, go here.

QUESTION: Do you have any workouts from the Delta Force?

ANSWER: Yes, check out this article.