If your out on a camping trip or on the battlefield of Afghanistan, a multi tool comes in real handy in time of need.

From working on your weapons, repairing your gear or just cutting the top off a beer can (important stuff) ..

you need a good multi tool in your pack that you can depend on every time.

Check out these reviews, comparisons and videos for the Top 10 Multi Tool reviews that SGPT athletes have been using in the field.

LEATHERMAN MUT TACTICAL MULTI-TOOL review by BT:
The MUT is a great multitool and has everything you would expect from Leatherman, but it also has very specific items that will come in handy if you are a shooter, especially of AR-15 or M-16s. The Leatherman MUT Tactical multi-tool

has a pin removal punch that is quite handy for Black Rifles, along with a bronze carbon scraping tool that will work on all guns without damaging steel parts that it comes in contact with.

I had a Schrade but wanted to try the MUT. The wire cutters are replaceable and the web cutter is pretty nifty as well. It’s pretty big and bulky, but will replace several range tools if you are a shooter.

has been produced a long time. It is a nice pocket tool and since Leatherman has introduced a new small pocket tool “Squirt” the prices have fallen greatly. The major difference between this Leatherman small pocket tool and their “squirt” is thickness, the “Micra” being thinner and also tool access. With the “Micra”, it needs to be unfolded to access the knife, screw drivers, etc. With the “Squirt” these are accessible while the tool is closed.
Also with the “Micra” the tweezers are attached, and with the “Squirt” they’re not. To me, those features and that some models have pliers or wire cutters, instead of scissors seem to be the main selection decisions.

SOG POWERASSIST review by Manning:
I purchased this a a gift for my father and I own the same tool in the plain stainless steel finish. It’s a great multi-tool. Super durable and just plain beefy. If you’re looking for a light little pocket knife/tool the SOG PowerAssist Multi-Tool

probably isn’t it. Maybe a Leatherman Squirt or even a SOG Paratool. The black finish is actually a lot nicer than the stainless steel because it doesn’t show fingerprints as badly. I have found that this tool has replaced my daily carry pocket knife (a SOG Flash II) for a couple of reasons. First, the pair of assisted blades. Having a quick choice between the straight or serrated blades rather than having both in one blade is nice. The other thing is that carrying a multi-tool rather than a dedicated pocket knife tends to be less intimidating to people in the general public. When I pull out the Flash II people’s eyes tend to widen a little and they make snarky comments. The PowerAssist blends right in as just another tool for most people and the only raised eyes and comments have been from folks admiring the thing. 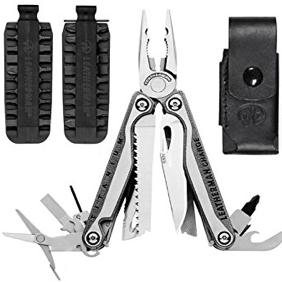 the original PST(in black) 20 years ago with money I saved up…(I’m 28) I purchased another PST(regular) not too long after that(with savings again..) for my Dad. We both still have them. I always tinkered with things since a child, worked construction jobs in High School, shot my first firearm at age 5, got my hunting license at 12… enlisted Infantry at 17, went to Afghanistan with the Leatherman Wave my Father got me, then finally the Charge he shipped to me while I was in Iraq.

I’ve been on over 500 combat missions, did around 7 years in Military(2, 1/2 as a Reserve CI Agent) held instructor positions for MOUT and both Rifle & Pistol Marksmanship and now 6 years in L/E, currently assigned to Special Ops.

VICTORINOX SWISS ARMY SWISS TOOL review by Dustin:
I’ve purchased several Victorinox Swiss Army Knives and this one is by far my favorite. I’ve had it for over ten years and it is still going strong. My one complaint in general with buying pocket knives is that you always end up with at least one tool that you don’t need and at least one tool that you wish you had. The Victorinox Swiss Army Super Tinker Pocket Knife

has 3 tools in its back, 2 of which I never really use. One of those is the hook thing. I think you can use it to hook on to a piece of wire that is wrapped around something heavy then you use the rest of the knife as a handle. Haven’t had the opportunity yet. The other is the sharp thing with the eyelet. Has something to do with being able to work with leather, I think. Haven’t had the opportunity. The other tools all come in very handy although I wish the phillips screwdriver was more conveniently located.

LEATHERMAN SQUIRT ES4 KEYCHAIN MULTITOOL review by Kim: I own numerous Leatherman multitools including the Mini, Pulse, PST, Juice S2, Juice SC2, Wave, Skeletool, Skeletool CX, Micra, Squirt P4, and Squirt S4. I also own numerous Victorinox Swiss Army Knives and multitools. I truly respect and admire the stellar designs utilized by both companies. Having used and owned all these different tools, I feel that the Leatherman 831200 Squirt ES4

VICTORINOX SWISS ARMY MANAGER POCKET KNIFE review by Bruco:
As you can see by the title of this review, I’m so excited about the new Midnite Manager that I’ve lost grasp of the English language. I carried around the older version of this knife for a few years. It was exactly the same, but had a red light instead of the new white light. I often thought to myself “This knife sure is swell, but the red light isn’t as useful as a white one would be.” Well, Victorinox crawled inside my brain, scooped out that thought, and made it come true! The Victorinox Swiss Army Midnite Manager

has every tool on this thing comes in handy, the bottle opener, screwdriver, scissors, blade. Even the tools I don’t use very often myself come in handy – my wife is always borrowing it in the car to file her nails, or at the grocery store to cross things off her list with the pen. The new white light is surprisingly bright for its size. You won’t be landing airplanes with it or anything, but it’s gobs better than the old red one.

is extremely well built. Resists torque/twisting that some other multi-tools don’t. Nice heft, but not too heavy to slip in a pocket. Smooth and comfortable finish in the hand. A really nice selection of functional tools. Great tool locking, easy to release (but only when you want!). I’ve used several other multi-tools and beyond the novelty, I never really enjoyed the flip out style (Gerber) because it seemed a bit unstable and difficult to put back. And most of the others cut into the palm. and Rebar, as well as all the others, but because there are so many models, it can be hard to choose which one to buy. I hope to help in the choice of economical “Full-size” multitools, as Leatherman calls a number of models. The “full size” line of tools are all about 100mm long when folded, and include the Charge TTi, the New Wave, the Rebar, and the Wingman. The first two are much more expensive than the latter two, and I will only discuss the Rebar and Wingman.

Leatherman 830846 Skeletool
Multitool review by Patrick:
WHAT THIS TOOL IS NOT—
I have seen this tool pitched for hiking/camping. If you are an avid outdoorsman, get the Charge TTi. The Leatherman Skeletool Multitool

is lighter but only by 3.2 ounces (5 compared to 8.2). For that minimal weight savings, you sacrifice having a saw, file, backup blades and a can opener. Seems like a really bad trade off in survival situations.

WHAT THIS TOOL IS—
The Skeletool is a great pocket knife replacement. It is light enough and compact enough to replace your trusty pocket knife. Without even openning the swing arms, you can access the knife (which is very solid) and bottle openner / carabiner. Openning the swing arms provides access to very solid pliers and screwdriver. The screwdriver gives access to 4 screwdriver heads since the removable bits are reversable and the handle stores an extra bit.

always seemed very ‘handy’, but seemed a little lightweight for my purposes. But I asked around among my trusted friends and associates and I decided the Gerber Diesel had the strength and the features I was after. And after testing this bad boy in the field, I can truly say it performed without flaw.

Questions from our readers online.

Question: What is a multi tool used by contractors in Afghanistan? The Leatherman MUT Tactical multi-tool

has been used by contractors in Afghanistan as it works well on AR-15s.

Question: Which do you prefer with the Leatherman vs Gerber? Both get great reviews but I have a friend that swears by Leatherman. He definitely prefers Leatherman vs SOG. We are working on a comparison of leathermann vs schrade.

Question: What about the real avid ar15 tool vs Leatherman mut? Check out the video below on the Real avid

Question: What is another good multi tool for an AR-15? We like the Series 3 multi tasker at TopSpecUS.com

Where can I find out more info on multi tool companies? You can go to the OutdoorIndustry.org